Learn the Facts About Suicide

Information below is from the National Alliance on Mental Illness (NAMI)

Debunking these common myths about suicide can hopefully allow individuals to look at suicide from a different angle—one of understanding and compassion for an individual who is internally struggling. Maybe they are struggling with a mental illness or maybe they are under extreme pressure and do not have healthy coping skills or a strong support system.

As a society, we should not be afraid to speak up about suicide, to speak up about mental illness or to seek out treatment for an individual who is in need. Eliminating the stigma starts by understanding why suicide occurs and advocating for mental health awareness within our communities. There are suicide hotlines, mental health support groups, online community resources and many mental health professionals who can help any individual who is struggling with unhealthy thoughts and emotions.

Here are some of the most common myths and facts about suicide:

Myth: Suicide only affects individuals with a mental health condition.

Fact: Many individuals with mental illness are not affected by suicidal thoughts and not all people who attempt or die by suicide have mental illness. Relationship problems and other life stressors such as criminal/legal matters, persecution, eviction/loss of home, death of a loved one, a devastating or debilitating illness, trauma, sexual abuse, rejection, and recent or impending crises are also associated with suicidal thoughts and attempts.

Myth: Once an individual is suicidal, they will always remain suicidal.

Fact: Active suicidal ideation is often short-term and situation-specific. Studies have shown that approximately 54% of individuals who have died by suicide did not have a diagnosable mental health disorder. And for those with mental illness, the proper treatment can help to reduce symptoms.

Fact: Warning signs—verbally or behaviorally—precede most suicides. Therefore, it’s important to learn and understand the warnings signs associated with suicide. Many individuals who are suicidal may only show warning signs to those closest to them. These loved ones may not recognize what’s going on, which is how it may seem like the suicide was sudden or without warning.

Myth: People who die by suicide are selfish and take the easy way out.

Fact: Typically, people do not die by suicide because they do not want to live—people die by suicide because they want to end their suffering. These individuals are suffering so deeply that they feel helpless and hopeless. Individuals who experience suicidal ideations do not do so by choice. They are not simply, “thinking of themselves,” but rather they are going through a very serious mental health symptom due to either mental illness or a difficult life situation.

Myth: Talking about suicide will lead to and encourage suicide.

Fact: There is a widespread stigma associated with suicide and as a result, many people are afraid to speak about it. Talking about suicide not only reduces the stigma, but also allows individuals to seek help, rethink their opinions and share their story with others. We all need to talk more about suicide.

Risk factors are characteristics or conditions that increase the chance that a person may try to take their life. 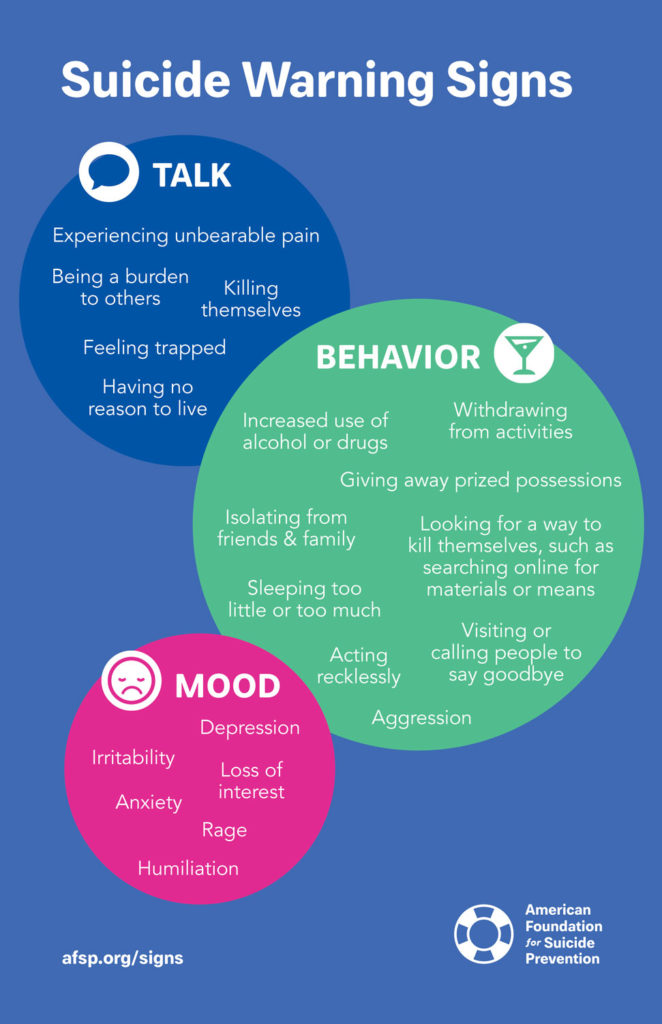 Something to look out for when concerned that a person may be suicidal is a change in behavior or the presence of entirely new behaviors. This is of sharpest concern if the new or changed behavior is related to a painful event, loss, or change. Most people who take their lives exhibit one or more warning signs, either through what they say or what they do.

If a person talks about:

Behaviors that may signal risk, especially if related to a painful event, loss or change:

People who are considering suicide often display one or more of the following moods: